Who doesn’t love pizza? It’s the one thing every newly gluten-free person bemoans: “But then I can’t have pizza!” Fortunately, there are a lot of options for gluten-free pizza nowadays.
I remember even five years ago how difficult it was to find good gluten-free pizza without making it myself. I prefer making pizza from scratch, but it isn’t always the easiest thing to throw together at the whim of a craving.
There are two particular companies that make excellent premade gluten-free pizza crusts: Udi’s Gluten Free Foods and Rudi’s Gluten-Free Bakery. I’ve used Udi’s pizza crusts for about a year. Rudi’s recently developed their own gluten-free pizza crust and sent me a sample, so I decided it was time for a comparison review. Rudi’s was also kind enough to send me samples of their hot dog and hamburger buns so you can expect reviews of those soon.
And no, Udi’s and Rudi’s are not related companies, despite the similarity between their names. I’ve been watching their tug-of-war over the gluten-free bread market for awhile. Their products are similar and they seem to be taking cues from each other as they develop better and better recipes. It’s a bit like a game of Jenga—which company will create the best gluten-free products and which will collapse the tower trying? Gluten-free consumers are the true winners in this contest. Both companies make spectacular products. (I already made it clear in this review a few months ago that I prefer Rudi’s Multigrain Bread to Udi’s counterpart.) 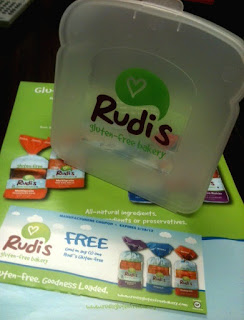 Interested in trying Rudi’s products yourself? I’m hosting a CONTEST with a prize for one winner. The winner will receive two FREE loaf coupons and two Rudi’s sandwich boxes! To enter, please comment on this post with your most creative and delicious pizza topping. What pizza really makes your taste buds sing? Contest ENDS Tuesday, September 20, 2011, at 9pm Seattle (Pacific) time. I will judge the winner on the creative and skillful pairing of their flavor combinations.
Udi’s Gluten-free Pizza Crusts
4/5 spoons
Overall, an excellent, easy to use frozen pizza crust with good flavor.
Pros:
Cons:
Rudi’s Gluten-free Pizza Crusts
3/5 spoons
Overall, a good frozen pizza crust: easy to use, decent flavor, quick to prepare. I wouldn’t hesitate to pick up Rudis Pizza Crusts in a pinch. But I'd love it if Rudi's would make a multigrain crust; therein lies their true bread genius.
Pros:
Cons: 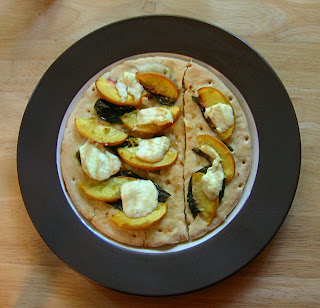 Adrienne
Seattle, WA, United States
I've been gluten-free for ten years and I'm working towards starting a gluten-free cafe with my husband. It's time to take food allergies beyond celery, making ALL diets a bit more interesting than our crunchy green friend.